Balls of Light (4): The Questionable Science of Crop Circles

Eltjo Haselhoff writes a letter to the editor of the Journal of Scientific Exploration; Grassi et al. reply

You can download the original JSE pdf file or you can directly read the web version below.

Letters to the Editor


The following exchange about an article previously published in the Journal of Scientific Exploration exceeds in length our guidelines for letters, and to some extent our guidelines as to precise focus on specific points. However, we felt obliged to allow Haselhoff to have his say after our publication of a piece that had criticized some of his writings.
That earlier piece we had published, as noted at the time, because the journal that had disseminated the work being commented on had refused to accept this commentary – in retrospect, it regretted having given any space at all to the matter of crop circles. The Journal of Scientific Exploration, of course, is open precisely to topics excluded from venues of orthodoxy, and we also believe that a journal that has published something should permit at least one dissenting critique.
However, we will call a halt at this stage to the present to-and-fro. Any future submissions on the question of crop circles will need to be full manuscripts, and will be reviewed under our customary stringency as to focus, presented evidence, statistical inference, and logical discussion.

Haselhoff Responds to "Balls of Light: The Questionable Science of Crop Circles" 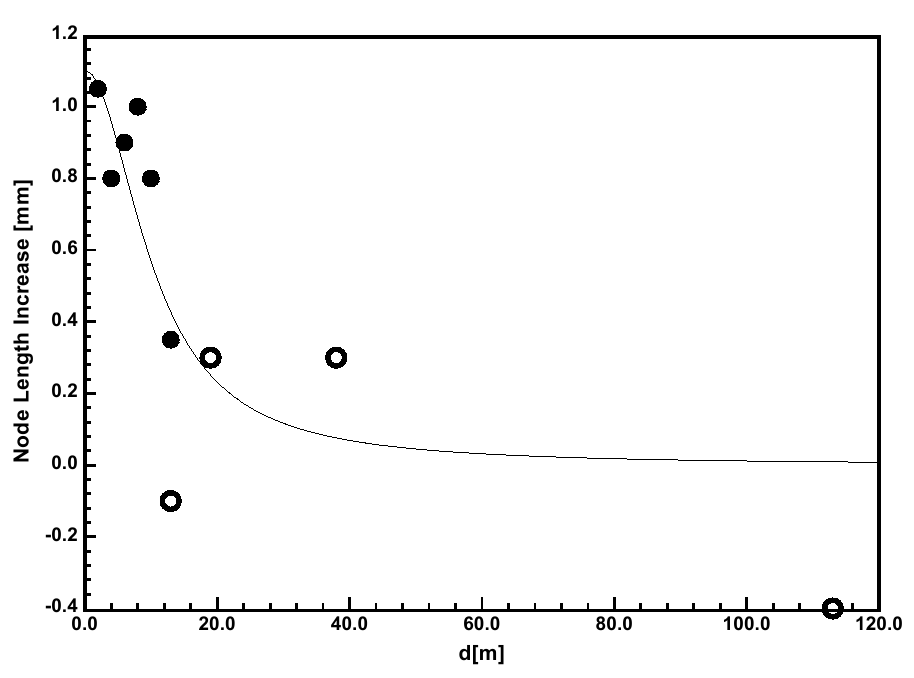 (click to enlarge)
Fig. 1. Analysis of the Nieuwerkerk formation as carried out by Grassi et al. Horizontal axis: distance from circle center; vertical axis: node length increase. The open dots represent data added by Grassi et al. According to the authors, these improve the fit to the BOL model (indicated by the solid curve). However, the horizontal coordinates of the three rightmost open dots are not correct, whereas two open dots correspond to node length decrease, hence violating the BOL model.

Summarizing, Grassi et al. conclude that the findings presented by BLT (Levengood 1994; Levengood and Talbott, 1999) demonstrate nothing but a difference in node elongation between flattened and upright plants, which could be the result of whatever flattening mechanism. Their conclusion is in line with their erroneous statistical analysis, for which each data pair is incorrectly interpreted as the result of a single stem measurement. In reality, however, all reported variances in node length were statistically significant, with a clear correlation to the geometrical imprints in the field, i.e., depending on the linear distance from the imprints. The fact that this crucial aspect of the two BLT papers was not recognized by Grassi et al. renders most of their statements invalid.
Despite the fact that I would have preferred a more open and particularly a more honest communication, I would like to thank Mr. Grassi and his co-authors for their interest in our work. Their recommendations will be considered for future research.